Nuclear AMRC welding specialists have successfully joined 100mm thick steel plates with a single weld. The landmark result means that welding time for large pressure vessels could be reduced from weeks to hours. 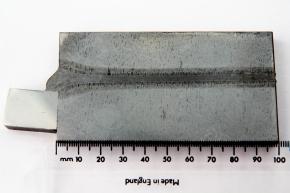 The team used electron beam welding, which is capable of joining much thicker components in a single run than other welding technologies while maintaining high material quality. The technique has become accepted in the aerospace and automotive industries, but is not yet used in nuclear manufacturing.

“Parts which would traditionally be welded in weeks could be welded in one day,” says Bernd Baufeld, power beam technology leader at the Nuclear AMRC. “E-beam welding has a major advantage in cutting costs for pressure vessels and other large nuclear components by reducing the time of production.”

Pressure vessel walls are currently joined by multiple tungsten inert gas or submerged arc welds – between 20 and 80 runs for a 100mm thick section –  with repeated non-destructive evaluation (NDE) to ensure material quality. With an electron beam, it takes just one weld and one round of NDE. Electron beam welding also reduces the requirement for pre-weld machining, as it requires a simple butt rather than a v-shaped weld prep.

“100mm is at the border of what’s traditionally done in the e-beam world,” Baufeld notes.

One of the biggest challenges was dealing with the several cubic centimetres of liquid metal produced by the electron beam. “You can’t weld with a vertical beam because you’d lose metal through dripping,” says Baufeld. “You have to weld with a horizontal beam, and you still have to keep the metal contained.”

Initial tests show that the join has excellent material properties, comparable to the plate material. The team has also achieved 80mm single-pass joins in stainless steel and 85mm in nickel-base alloy.

Baufeld and the team are continuing to develop the technique to produce larger demonstration parts, and apply the lessons learned on the K25 to the Nuclear AMRC’s giant new K2000 e-beam chamber. 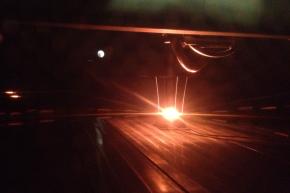 With a 208m3 chamber, the K2000 is over 80 times the volume of the established K25 facility, and believed to be the largest e-beam chamber in the UK. Its gun was fired for the first time (pictured) in late 2013, and the cell will be fully commissioned and available for collaborative research from the end of March.

The Pro-Beam K2000 gives the capability to complete very intricate joins on large components using nine axes of movement – four for the component and five for the electron gun. It can be used to weld gas turbine parts up to three metres in diameter, with fully automatic joint following and variable thickness programming – capabilities found in only a handful of machines worldwide.