A new technology to identify weld defects in minutes will save time and cost in high-integrity fabrications for nuclear new build projects and other quality-critical applications.

The technology was developed by the Awesim (Automated Welding Equipment System Inspection and Monitoring) consortium, led by Cavendish Nuclear and drawing on the Nuclear AMRC’s expertise in real-time weld monitoring.

The Awesim technology is a game-changer for fusion welding, as it enables real-time detection of defects as they occur. It will yield greater schedule certainty, take hours out of the welding process, help to significantly reduce the incidence of abortive welds, drive productivity up, and improve sustainability by reducing the energy and materials used in the weld.

The Awesim technology gathers high-resolution data from several different sensors which interrogate the fusion welding process in real time, and uses computer algorithms to rapidly analyse the data. This process gives operators an immediate indication of the presence of any welding defects. The sensors include acoustic, laser profiling, cameras and temperature-compensated phased array ultrasound.

“The impact of this disruptive technology in the field of high-integrity fabrication is expected to be significant,” says Tony Burnett, head of innovation and technology at Cavendish Nuclear.

“Our Awesim technology is capable of reducing the time taken between forming a fusion weld and knowing it is free from defects from several hours to minutes. Closing the time taken for feedback between welding and non-destructive weld inspection to such short durations enables significant productivity and sustainability improvements, provides greater schedule certainty so saving time and money while maintaining quality.” 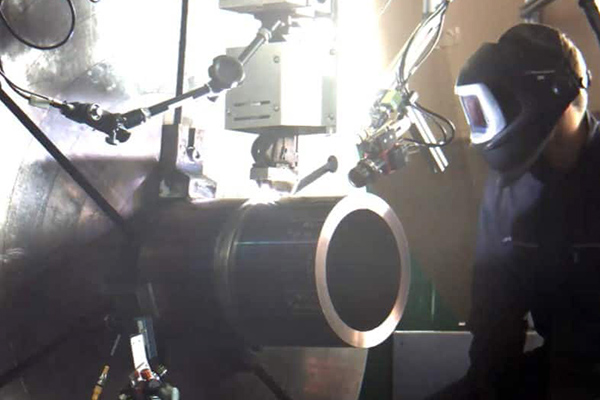 As part of the Awesim consortium, the Nuclear AMRC developed, tested and demonstrated the hardware and software for the welding defect sensor system. This included the development of various sensors, algorithm development and interface design, with a focus on building confidence in predicting the formation of weld defects in near-real time.

“The system displays the information directly to the operator, allowing them to make near real-time interventions,” explains programme manager James Leatherland. “Predicting the formulation of weld defects and enabling early intervention, particularly in thick section joining, can allow organisations to avoid costly rework and maintain delivery.”

Awesim is the latest in a chain of projects at the Nuclear AMRC to develop innovative technologies for predicting weld defects, and builds on the success of the Simple project which ran over 2018–19.

The Awesim consortium led by Cavendish Nuclear included the Nuclear AMRC, Doosan Babcock, the Advanced Nuclear Research Centre at University of Strathclyde, Peak NDT, Babcock International Group and Frazer-Nash Consultancy. The consortium has filed patents on the technology, and are now working towards a commercial launch of the Awesim technology.

“The Awesim project has demonstrated the power of collaboration in innovation between the academic and industrial partners in projects enabled by the judicious application of government funding to make a real tangible impact in bringing new, potentially disruptive technology to the market,” says Bert Holt, director of nuclear lifetime programmes at Doosan Babcock.

“The extent of the application of the patented Awesim technology to nuclear new build projects such as the future Sizewell C, UK SMR and AMR builds in the UK and similar projects internationally is expected to be great. However, its use in other industry sectors involving high-integrity welding, such as the defence and process industries, are likely to be even more significant.”

The Awesim project was part-funded by £1.35 million from BEIS through the Advanced Manufacturing and Materials Phase 2b call of the Energy Innovation Programme. Industrial partners provided a further £726,000 of support.

The Awesim project was highly commended in The Engineer magazine’s Collaborate to Innovate awards for 2021.