The governor of the Bank of England visited the Nuclear Advanced Manufacturing Research Centre to see how the University of Sheffield AMRC plays a key role in economic growth. 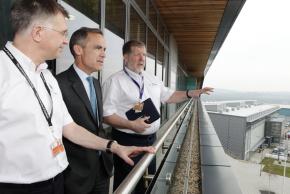 Governor Mark Carney was welcomed to the centre and given an overview of the AMRC cluster by Nuclear AMRC chief executive Mike Tynan and AMRC executive dean Professor Keith Ridgway (pictured L-R).

During his visit, Carney took part in a panel discussion with leading figures from advanced engineering and regional businesses, and gave a speech to an invited audience of around 200 business people. The governor’s speech is expected to be his last public appearance before the UK’s general election in May. 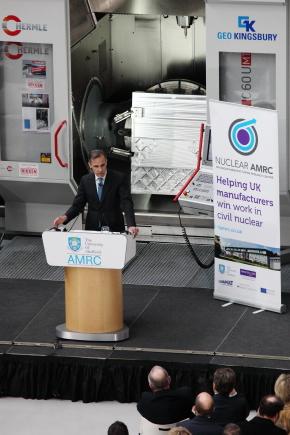 Carney praised the University of Sheffield AMRC as a prime example of Sheffield’s continuing spirit of hard work and innovation. “No one knows better than you that manufacturing needs to become ever-more productive to prosper in a world of steadily falling prices and relentless international competition,” he said.

“Prices for advanced manufactured goods fell on average by around one per cent a year during the decade prior to the crisis. They also have dropped steadily relative to those of simpler manufactured products – by 30 per cent over the last two decades – reflecting superior productivity growth. Your customers and society as a whole are the beneficiaries of your doing much more with less. The strong recovery of UK manufacturing over the past year – with growth stronger than at any point in the decade prior to the crisis – is a testament to the sector’s focus on continual improvement.

“Manufacturing punches well above its weight in spending on research and development. Manufactured products R&D has grown by a quarter since the mid-1980s and currently accounts for well over two-thirds of total UK spending on innovation. Advanced manufacturing sectors, including pharmaceutical, aerospace and automotive, represents well over half of this amount.

“Such contributions are crucial for the UK’s prosperity because our long-run economic performance hinges on productivity growth. Productivity is the ultimate determinant of people’s incomes, and with it the capacity of our economy to support health, wealth and happiness.”

The governor finished his visit by meeting apprentices at the AMRC Training Centre, which provides the practical and theoretical skills that manufacturing companies need to compete globally. The vital economic role of vocational education has been emphasised in a new report co-authored by University of Sheffield vice-chancellor Professor Sir Keith Burnett.