The Nuclear Advanced Manufacturing Research Centre is working with contract manufacturer Newburgh Engineering to deliver lasting business benefits. The centre’s machining research specialists are collaborating with Newburgh to make sure that the company’s key products are made in the most efficient way.

Newburgh has been working for several years with an overseas customer to produce large components for the energy industry. These parts require significant machining on large-bed machines at Newburgh’s Bradwell and Rotherham sites.

In today’s competitive global market, suppliers like Newburgh are constantly challenged to reduce costs. Newburgh is now working with the Nuclear AMRC to make sure its machining processes are optimised and to look at new techniques and technologies that could be applied. 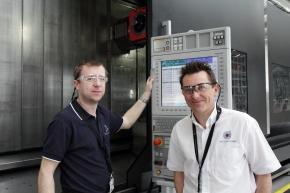 As part of Newburgh’s membership agreement, one of the company’s own employees – experienced production engineer Andrew Wright (left) – now works full-time at the Nuclear AMRC. As well as supporting the centre’s machining team, Andrew is leading the project to optimise Newburgh’s current production processes.

“Traditionally in a production environment, the engineers don’t have time to do detailed tests – you can’t optimise or do benchmarking,” he says. “At the Nuclear AMRC, we’ve got time to do the analysis and get the best processes together and collect some proper data.”

Andrew is currently heading a benchmarking process to establish whether the current process is already optimal or, if not, find ways to improve it.

One possible way to improve the production method is to use a more powerful machine tool. Andrew will lead tests on the Nuclear AMRC’s StarragHeckert HEC1600 horizontal boring centre. Newburgh does have similarly powerful machining centres of its own, but using them in research would mean they weren’t available for commercial production. “We can do this off-site and not cost Newburgh any production time,” Andrew notes.

Other companies which have joined the Nuclear AMRC are also providing their experience and resources. Sandvik Coromant, as a tier one member in the Nuclear AMRC, is collaborating as tooling partner for the Newburgh project. And the team are using CAD/CAM software provided by SolidCAM. “That’s a system that Newburgh don’t use, but at the Nuclear AMRC we’re able to use the latest system,” Andrew says. “We’ve got a pool of software from different companies that SMEs or even large companies wouldn’t have.”

Newburgh can also draw on the academic resources of the centre. Krystian Wika, postgraduate research engineer at the Nuclear AMRC, is leading the investigation into new production techniques which could potentially be introduced to Newburgh’s own factories.

Stuart Dawson, head of machining research at the Nuclear AMRC, says: “Andrew is an invaluable addition to our team. As well as his practical machining expertise, his industry knowledge helps keep us focused on the real business requirements of the companies that we’re working with. Newburgh is a great example of the kind of manufacturing company that can succeed in the nuclear supply chain, and we’re proud to be working closely with them to help achieve their ambitions for the UK market and beyond.”

“I have 20 years experience in subcontracting business for nuclear parts, and bring some practical manufacturing experience to the team,” Andrew says. “I’m also getting the opportunity to work with different systems and different people, and learn a new approach to work. The Nuclear AMRC is gaining real-world industry experience, and I’m gaining a more theoretical approach to manufacturing research.”

Newburgh Engineering started manufacturing parts for the nuclear industry in the 1950s from its Bradwell site, Derbyshire. This makes it one of the first engineering companies to establish itself in this sector, and one of the few who has never stopped producing components for nuclear reactors.

Nuclear contracts remain a significant part of the modern business, making up over a fifth of its total turnover. It was awarded a major 10 year contract from Springfields Fuels Ltd in 2011, demonstrating the company’s commitment to the nuclear new build agenda.

Commercial Manager Matthew Jewitt says: “Newburgh Engineering is already a premier contract manufacturer, and has decades of knowledge about producing parts for the nuclear industry. Working with the Nuclear AMRC to optimize and improve our production methods will make us even better, and should secure our place as a key supplier for the nuclear new build.”